Attendance:  The June meeting had 52 attendees; 48 members, 3 new  members, and 1 guest were in attendance.

Secretary Report:  Dennis Misiak read the minutes of the May 2019 meeting.

Treasurer Report:  The  Treasurer reported that the club continues to remain financially viable. The May meeting yielded a $384.00 profit to the Club resulting from the proceeds of the 50-50 Raffle, the sale of medals, and Good-Of-The Club donations.

Additional members are still needed to work at the TBCC table. (NOTE: TBCC members who volunteer must have a current membership in the FUN organization.)

An e-mail was sent to all participants that the $25.00 fee for the Grading Seminar needs to be paid prior to the seminar. Payments to be submitted to the TBCC Treasurer.

PAYMENT MUST BE RECEIVED PRIOR BY THE JULY MEETING. OTHERWISE, PARTICIPATION IN THE SEMINAR WILL NOT BE PERMITTED/

Monthly Attendance Drawing: Al O’Meara was the winner of the Silver American Eagle in the drawing.

in Numismatics was another open discussion. Several members presented excellent ideas during this session. Follow-up e-mails were also received with additional ideas. The Board of Directors will discuss the creation of a committee at the next BOD meeting to discuss developing a YN Program based upon the ideas received. All TBCC members who are interested in attending the BOD meeting are welcome. Those interested may obtain the information by contacting any of the Board members. 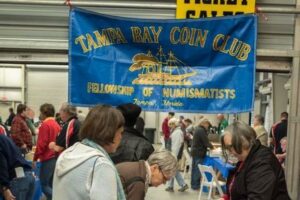